A fun night was had on Tuesday. We went out for a ‘quick’ ride on the mountain bikes. I don’t know if I’ve mentioned, but a while back Mr Shespoke put on a massive gnarly front tyre. I think he did it because a) it was a spare knocking around the shed and b) he thought it would look funny making me into a ‘real’ biker… So, I’ve been going around with this tyre on for a while. Well on Tuesday it came under attack.

Once the kids were in bed and Nanna was on duty we headed out.

Up through Styal and Quarry Bank Mill:

Then across to the airport perimeter.

The night was lovely; warm with a great sky and no rain!

When we were going along the airport path my front tyre started to feel different, flatter and flatter and flatter… until it was as flat as a pancake. Still a few miles from home I rode on it for as long as I could until no more – it was starting to come off the rim.

Between us we pushed the bike and ran for the final couple of miles. Overall, it was a bigger workout than originally planned; the darkness had crept up on us too. It’s getting dark around 9pm now and our bike lights need charging up.

We kept to the pavements with our run/ biking/ no lights. But a guy passed us on his bike with no lights, no helmet and earphones in on an A road, in traffic… please tell me why anyone would think this is a good idea? 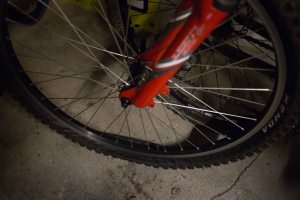